Malawi held elections on 21st May 2019. The results were announced on 27th May 2019. In between these days, there were already allegations that the Electoral Commissioners were manipulating votes in favour of the sitting President. This was actually made worse when it was discovered that a collecting fluid (commonly called Tippex) was used in some of the tally sheets mainly those that were of the presidential candidates. This promoted the opposition parties to dispute the results and called for either a recount or a re-run mainly on the President. However, the Commission went ahead and declared the sitting president a winner with 38.8% of the casted votes while, the closest contender collected 35.6%. This meant that the sitting President is running on the minority government. However, the constitution of Malawi depends on the first past-the-post system where who get the majority whatever percentage is declared a winner. The other thing to be observed was that the all candidates only got the majority votes in their home areas. 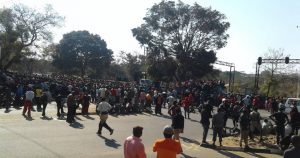 Figure 1: Demonstrators at City Centre going to the President's Office in July 2019

This promoted Civil Societies to mobilise themselves, under the Human Rights Defenders coalition to organise demonstration to force the Chairperson to resign. This has been going on for the past month or so. The Chairperson has refused to step down contending that she is not guilty. Each time we have demonstration there are a lot of disruptions, economic meltdown and insecurity of the community.

Figure 2: An attack the Government Supporter in Northern part of Malawi in July

On Tuesday, this week it become worse as most of the properties have been destroyed, shops looted, Police vehicles and houses burnt down. This has resulted into the Police standing by and the military stepping in to provide security to both the civilians, property and the demonstrators themselves. The absence of the Police is making the whole scenario scary. Our Business Centre is also becoming a focal point because of the equipment that we have. On Tuesday we were actually saved by the neighbour who deterred the demonstrators from destroying. However, we know that we just need to be on watch as anything can happen. 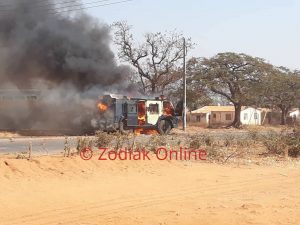 The question we are all asking is whether we are getting the answers that we want because the President has not even commented. A group of Pastors have organised themselves to mediate and we are yet to see or hear the outcomes of this effort. 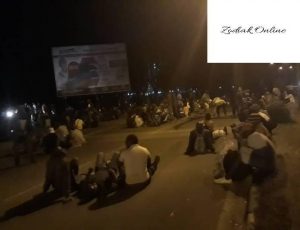 The organisers seem to be sponsors because they are able to feed ad provide the basic enmities to the demonstrators. The question is will these people stop going into the streets if they are able to get food. 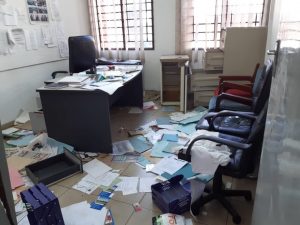 Figure 5: One of the Senior Officer's Office at the Government Headquarters 7 August 2019

They went an extra mile to loot at the government seat. This is the place where the presence of the Police is more visible then anywhere in the City, demonstrations or no demonstrations. 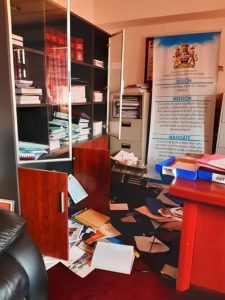 As a country this has very damaging effect on the economy. The country is dealing with a frustrated young people who had hopes of getting jobs and they are not getting anything. Most of these protestors are young people who have completely nothing to do. Also there is a general feeling that they are not getting any benefits from the multi-party politics.
We need your prayers for Malawi to go back to the peaceful country we all know.