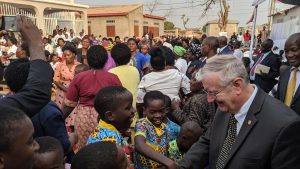 Angola is an African country about twice the size of Texas on the Western side of Africa (south of the equator) facing the Atlantic Ocean and between the Congo, Zambia and Namibia. It was a Portuguese colony (later declared a province) and achieved independence in 1975 after a colonial war with Portugal for 25 years. Immediately upon independence, Angola was involved in a devastating civil war for an additional 27 years till 2002. The civil war was a power struggle between two former liberation movements backed by proxy Cold War rival states, namely the Soviet Union and Cuba on one side and the United States and South Africa on the other. Today the country has linkages with Cuba, China, Portugal and African Unity countries.

In that difficult environment God called disciples who have remained loyal to the Truth and deeply desire to serve God. 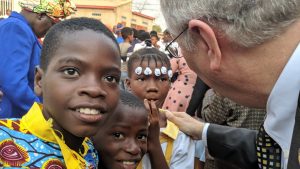 The Church in Angola was formed in 1983 as a Sabbath keeping church and in 1995 they became affiliated with WCG. As early as in 1997 they decided to remain faithful to the Sabbath and Holy Days observance. In December 2002 they officially broke away from WCG, but held onto the name of Worldwide Church of God in Angola. Since then they were led to believe that they alone were the remnant of God’s Church. In October 2015, after the Feast, they found us through the Portuguese UCG website and contacted us rejoicing to know that there were other brethren around the world holding on to the faith.

Their January 7th, 2016 letter to UCG’s COE reads as follows:

HISTORY OF WORLWIDE CHURCH OF GOD IN ANGOLA

The Church was founded in 1983 in Huambo province, through some brethren of the  Igreja dos Apóstolos Cheia da Palavra de Deus (Church of the Apostles Full of God’s Word), which upon realizing that Sunday was not the day that God gave his people to rest, stopped observing Sunday, reflected upon it and through prayer came to see that the day to worship God is the Sabbath and not Sunday. These brethren did not become Seventh Day Adventists, because they considered their doctrine and their form of worship was not the most correct. As such they formed the Igreja Evangélica dos Apóstolos do Sétimo Dia em Angola (IEASDA - Evangelical Church of the Apostles of the Seventh-Day in Angola).

This Church developed and branched out in 10 Angolan provinces. The Home Office was Huambo city. Despite having no knowledge of the Gospel of the Kingdom of God, nor of God’s holy festivals, it managed to keep thousands of members in the faith; the Spirit has always guided the core directors of this Church. As such, in 1991 the Church initiated the first contacts with the outside world and a delegation was set up of two ministers headed by pastor Paulino Herculano Cafuca, currently advisor to General Management, to travel to South Africa, in order to contact brethren of the Worldwide Church of God. Due to very limited financial resources they only made it to Namibia. Therein they managed to enter into telephonic contact with brother Jorge de Campos, who was then a deacon.

From there the doors opened; in 1994 the direction of the Church in the United States of America began sending literature such as:

→   The 12 lessons [of the correspondence course]; The Coming Utopia; Why were you born?; What is salvation?; Where is Enoch and Elijah?; Is there life after death?; Tithing and Giving; What is man? The Plain Truth, etc.

These booklets and/or studies motivated the Church and increased the spiritual drive of the members. In 1995 we received the first missionary visit. After the missionary visit, we asked for our affiliation as members of the Worldwide Church of God. That request was granted in a letter dated September 22, 1995, in an attachment to the said letter.

In 1996, the Worldwide Church of God directors, appointed an elder of Portuguese nationality, as church supervisor in Angola. From this year, the Church in Angola understood the God’s Master Plan for Mankind’s Salvation, and started keeping God’s Holy festivals.

In 1997, we received circular No. 25, which gave freedom to work on God’s holy day (Sabbath). God's people did not agree with this circular, given that it was transgressing the Lord’s commandment. From there, we spent some time without any minister visiting the church in Angola.

Notwithstanding all these circumstances, the Angolan Church holds on to the principles of obedience to the Lord, Psalm 111:10. But as we know, the work is Jehovah’s, and the Church has fought off all attempts to apostatize, until finally now we found the brethren of United Church of God, whom also remained firm in the truth of God.

Greetings from the brethren in Angola to all faithful ones in CHRIST in the United Church of God.

Signed by : The Board of the Worldwide Church of God in Angola

“Your unique story and spiritual journey commencing in 1983 to follow God’s Word in faithful obedience is truly inspiring and reminds us that our Heavenly Father calls those whom He will call, where He will call them, and when He will call them (John 6:44) to follow Jesus Christ. It gives cause to rejoice when we consider how great and loving our God truly is. It is one thing to take a stand, but it is clearly inspiring to see people remain standing for God’s ageless truths no matter what, as you have done. You have shared your collective story as a people, and we have been pleased to share with you the Internet information and literature that we have to explain the gospel of Jesus Christ and the Kingdom of God...

“Wherever God’s Spirit directs any future communication or relationship among our two organizations, please know that we approach the membership of the Worldwide Church of God in Angola with deep respect and mutual esteem towards our Heavenly Father for what He has brought forth in all of our lives. It is by His grace, mercy and divine revelation alone that we are able to serve Him.”

The brethren in Angola received this letter with great joy and gratitude to God. As a follow up to their request, we send regularly to the brethren in Angola a number of the Portuguese edition of Beyond Today magazine (A Boa Nova), booklets and correspondence courses. We also visit them regularly and have conducted various leadership training workshops in Angola. We also sent some of their leaders to South Africa in December 2017 to attend an ABC Continuing Education program in South Africa. Even though they have never asked us for any financial aid, we have voluntarily provided financial assistance to improve their restrooms (toilets) in their K-8 community service schools which they run and to complete some of their main office projects.

In the last few years a number of churches with practices not conforming to the newly elected government authorities accepted standards, such as churches promoting ‘healing potions’ and a ‘prosperity-gospel’, have appeared in Angola. As such they have decreed that all churches with less than 100,000 members (more recently reduced to churches with 60,000 members) would be closed and cease from gathering, move, or have any assets, subject to special approval. The Church in Angola has submitted an application within the defined timeframe and is awaiting for further instructions.

Congregations in the meantime have been closed, but have subsequently been allowed to re-open following their appeal and God’s intervention. The latest action by their bank to freeze their account is also very serious, not only because it affects the operation of the Church, but also affects the operation of the K-8 schools and teachers that they fund as a service to local communities. If the bank account is not given permission to reopen within 3 months by the appropriate government authority then the account will be closed and the funds in the account will be lost. The bank account has their income from tithes, as well as the remaining construction finances that UCG’s Good Works and UCG’s Portuguese subsidy has voluntarily sent them for above mentioned service projects.