In the autumn of 1996 Ivan Yurishko, my friend from Khust in western Ukraine, a Sabbath-keeper, visited Misiones, Argentina to Sabbath-keepers, many of Ukrainian origin.  I had met with some of these people in Uruguay in 1993 and 1994.  Ivan brought Oleh Pavliy with him, who was the son of Sabbath leader Ivan Pavliy from Rokosovo, Ukraine.  Here are photos from his 1996 visit.

I will be visiting in this area in late January 2018 with Mario Seiglie and our wives and hope to find some of these people again.  I will report on this after we visit. 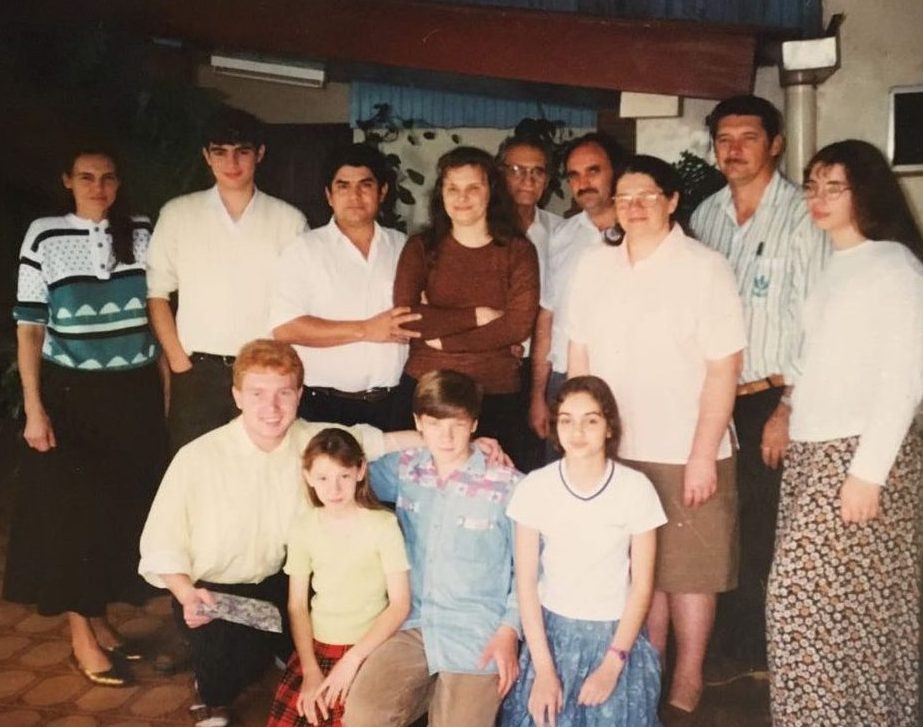 From left in blue outfit is Dina, daughter Miguel. In the middle is daughter Alicia who husband is from Chile. Claudia is the one with glasses who is wife of Pedro. In front next to red-head Oleh Pavliy are the kneeling children of Alicia 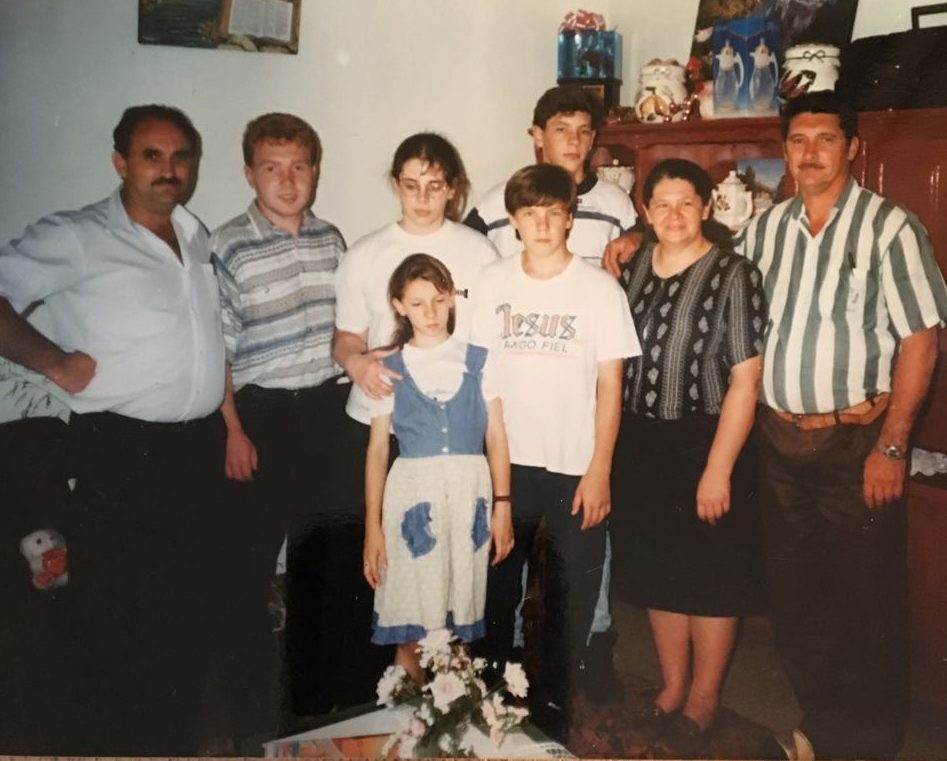 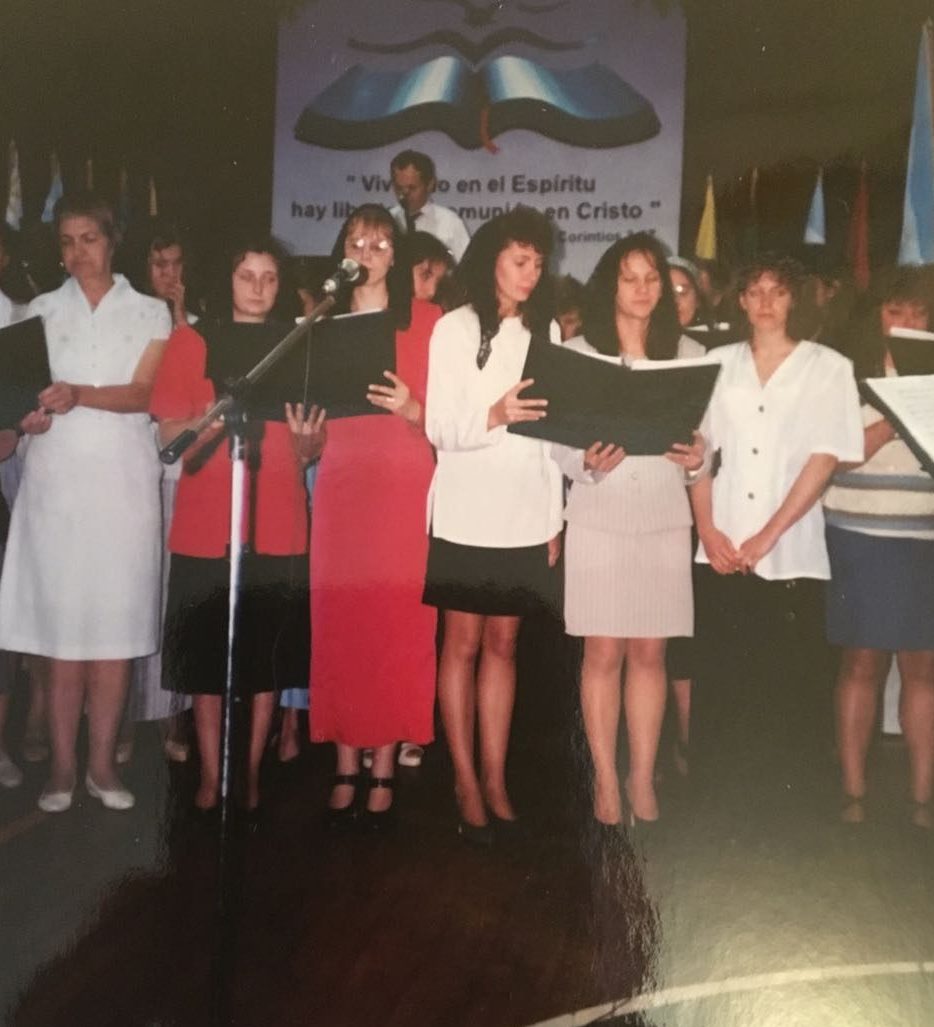 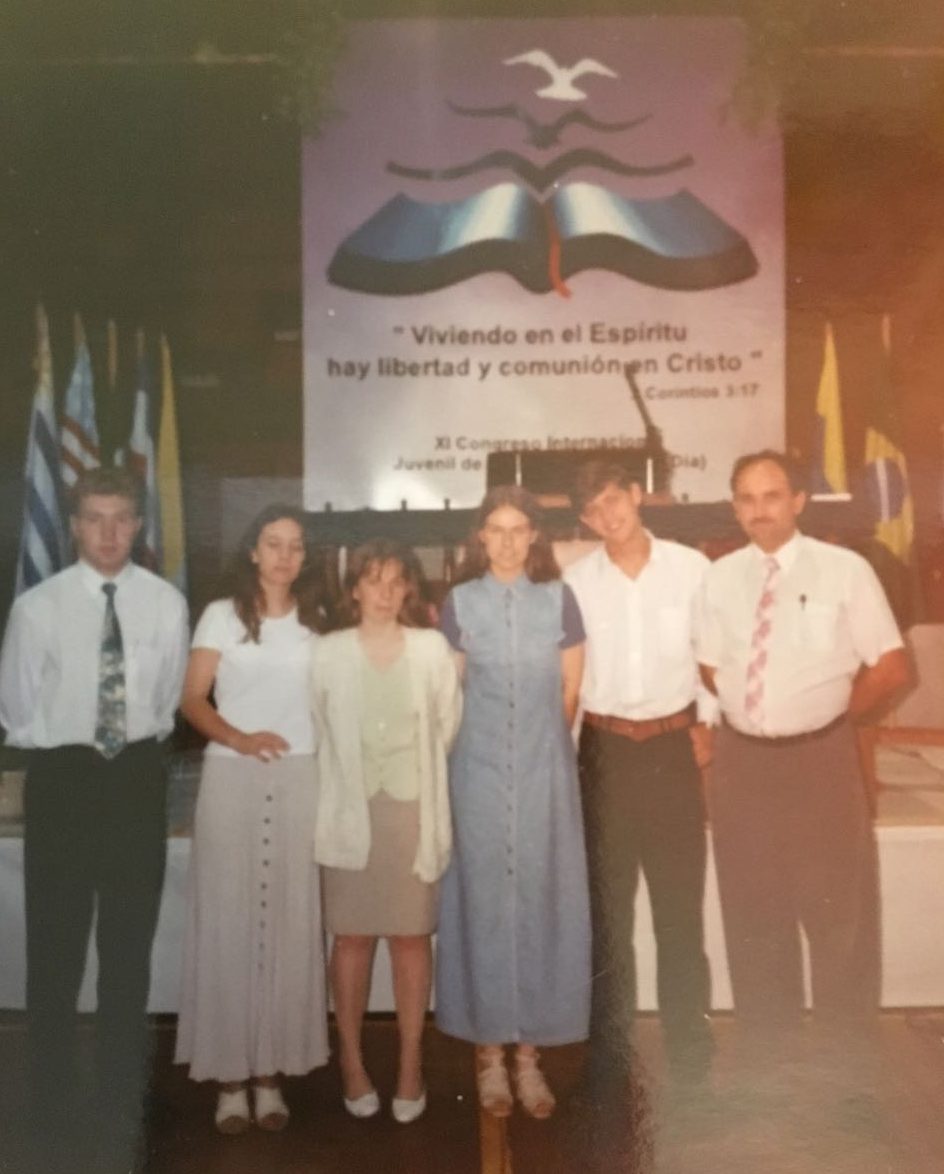 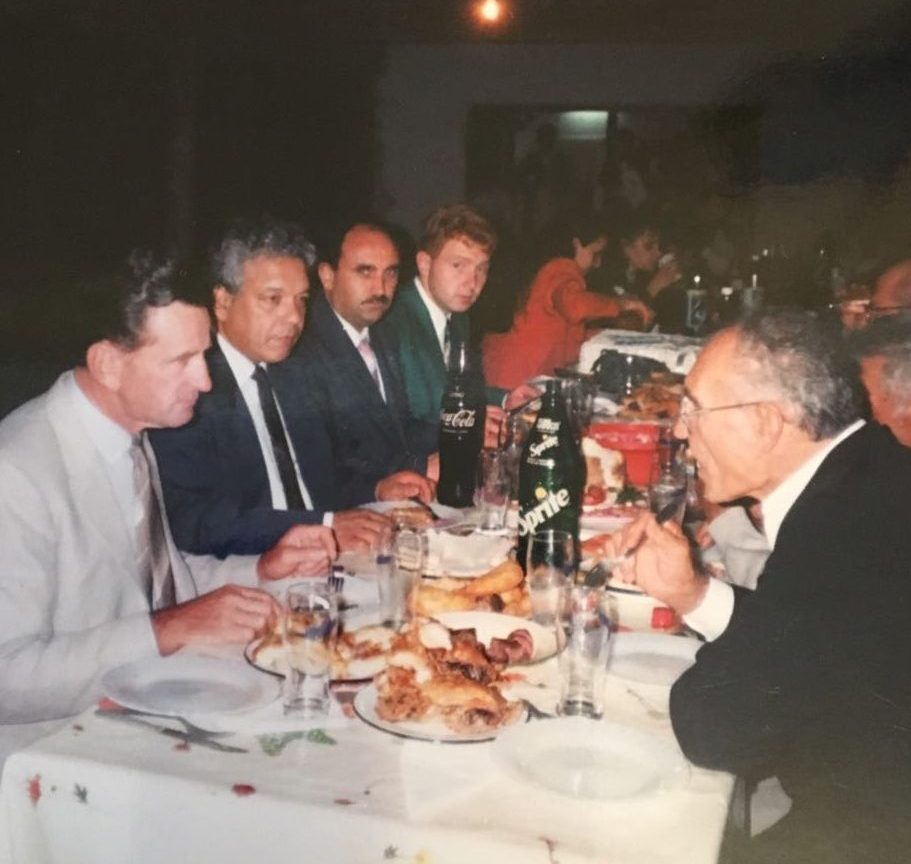 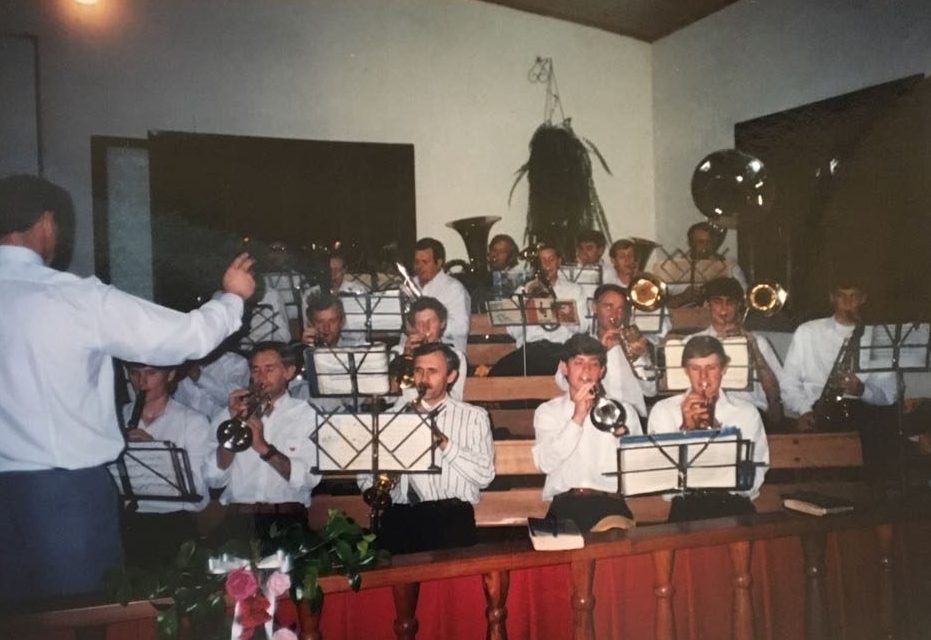 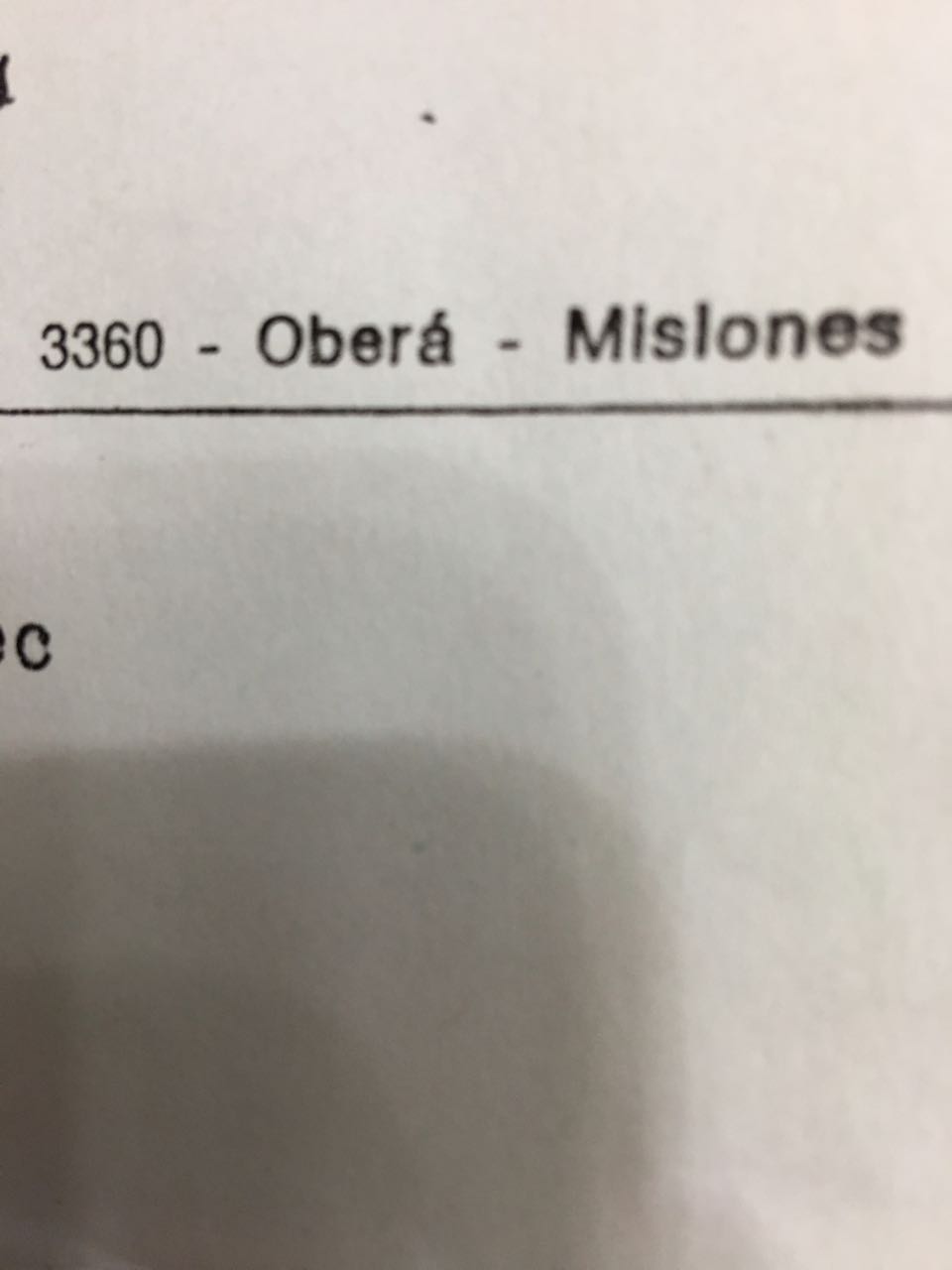 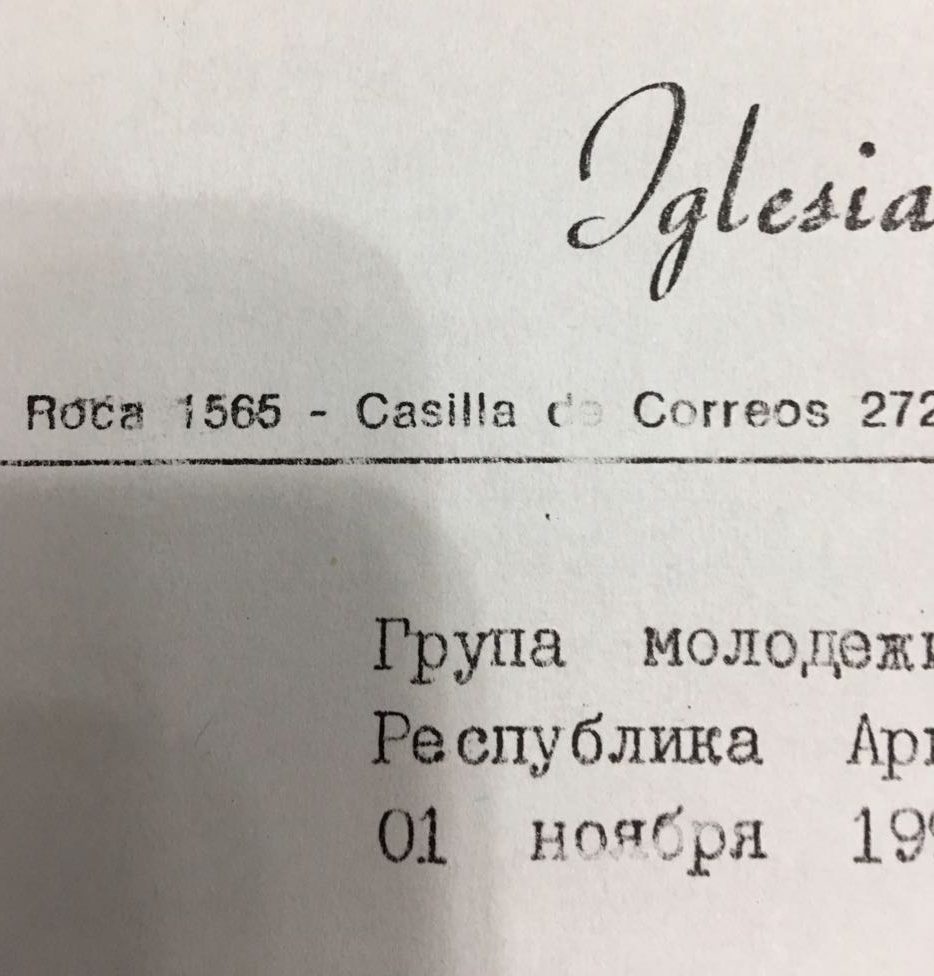 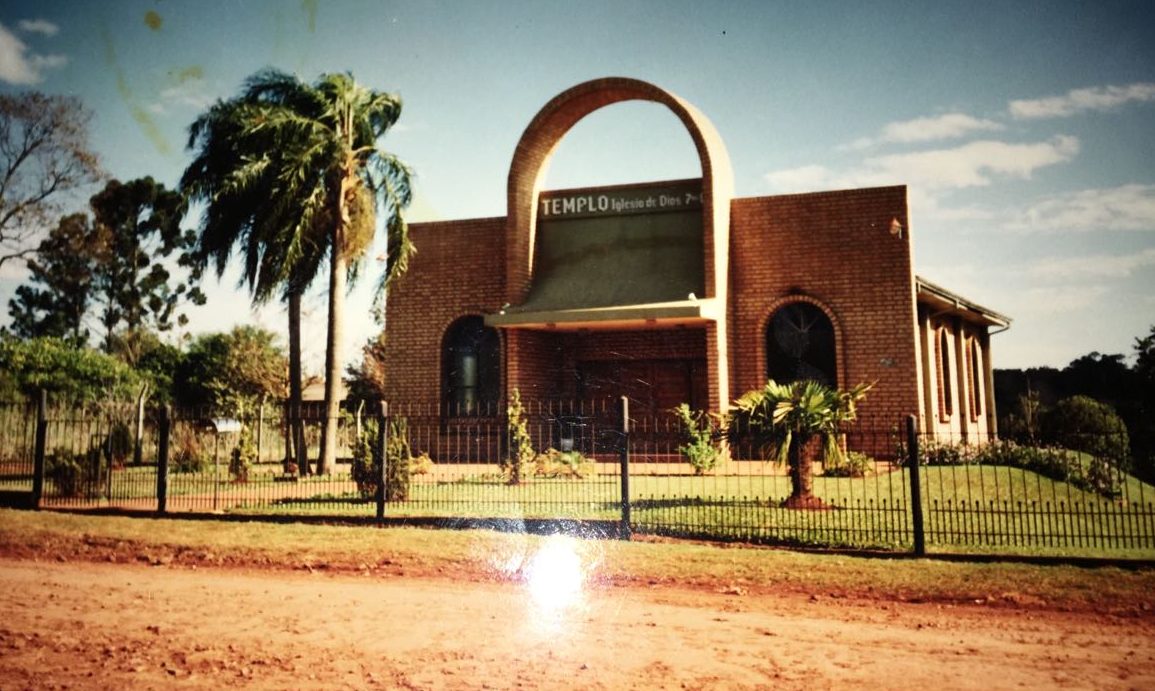 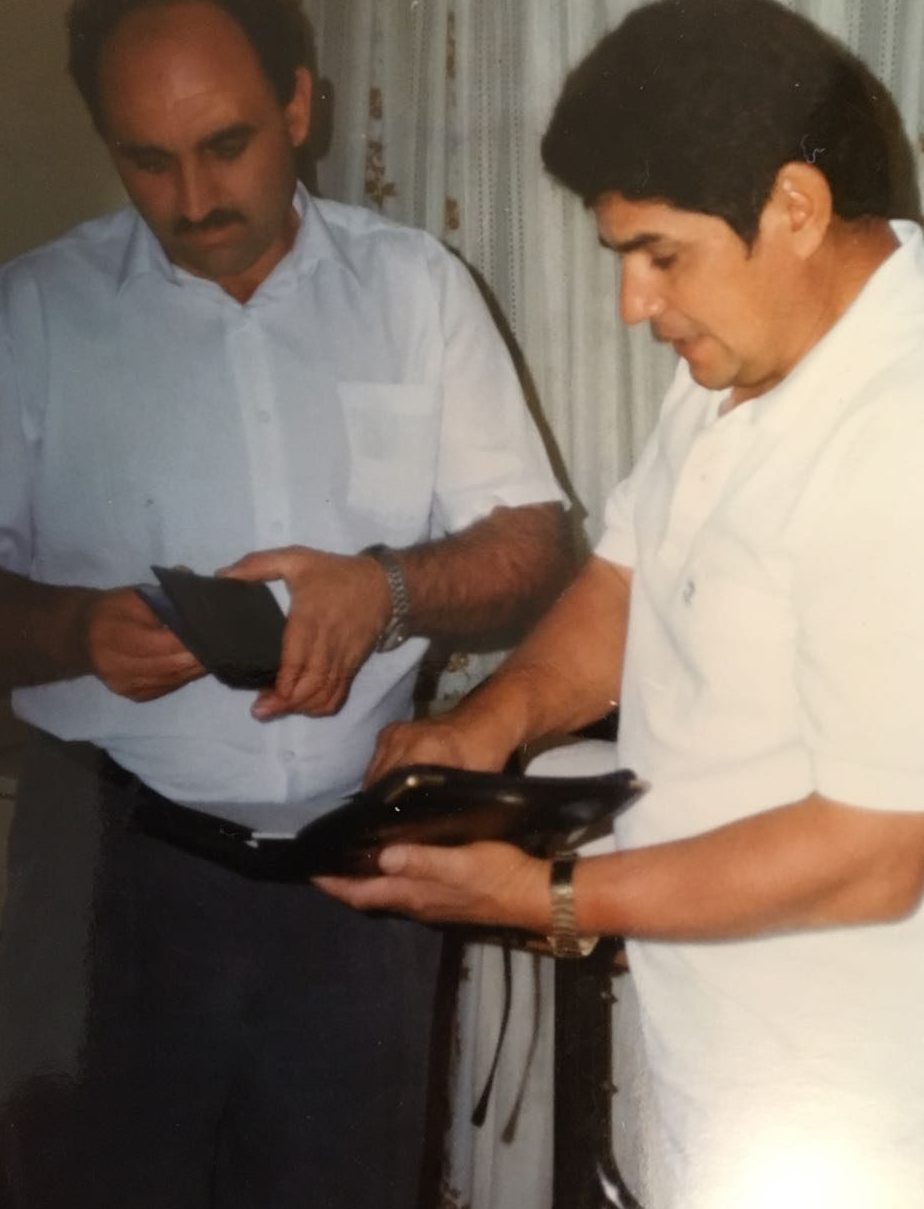 Husband of Alicia daughter of Miguel. He is from Chile 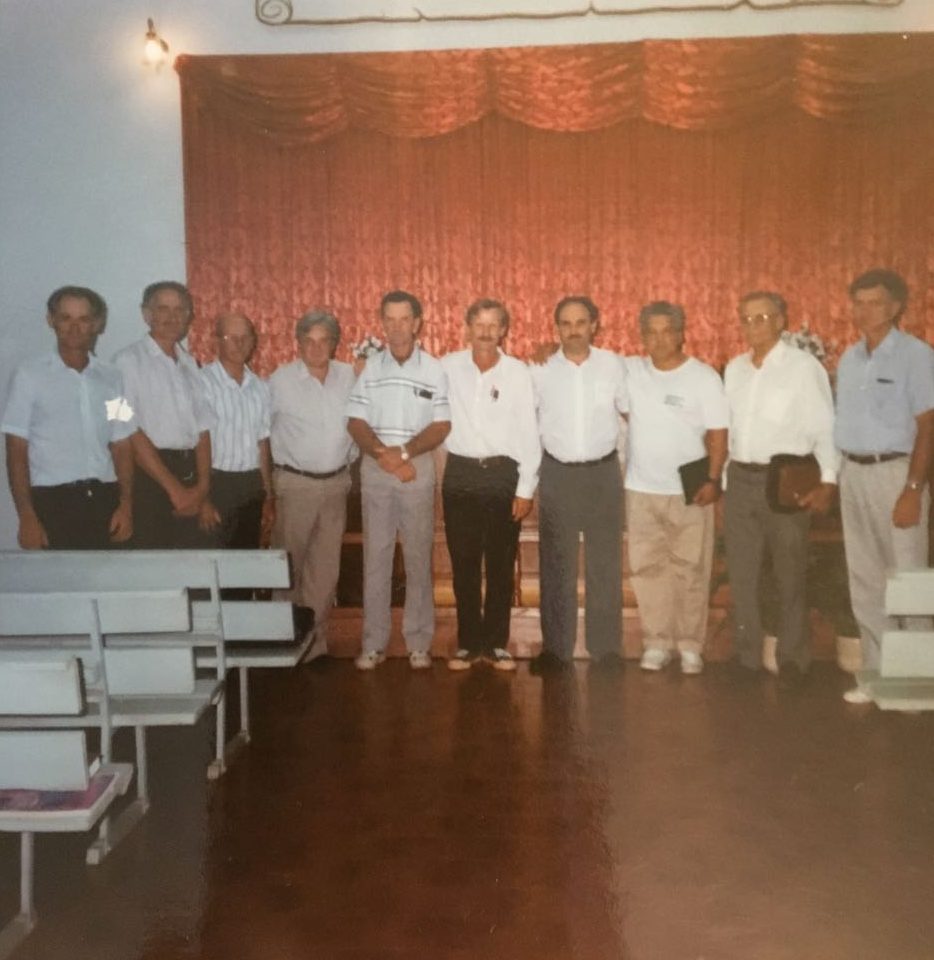 Servants in the church 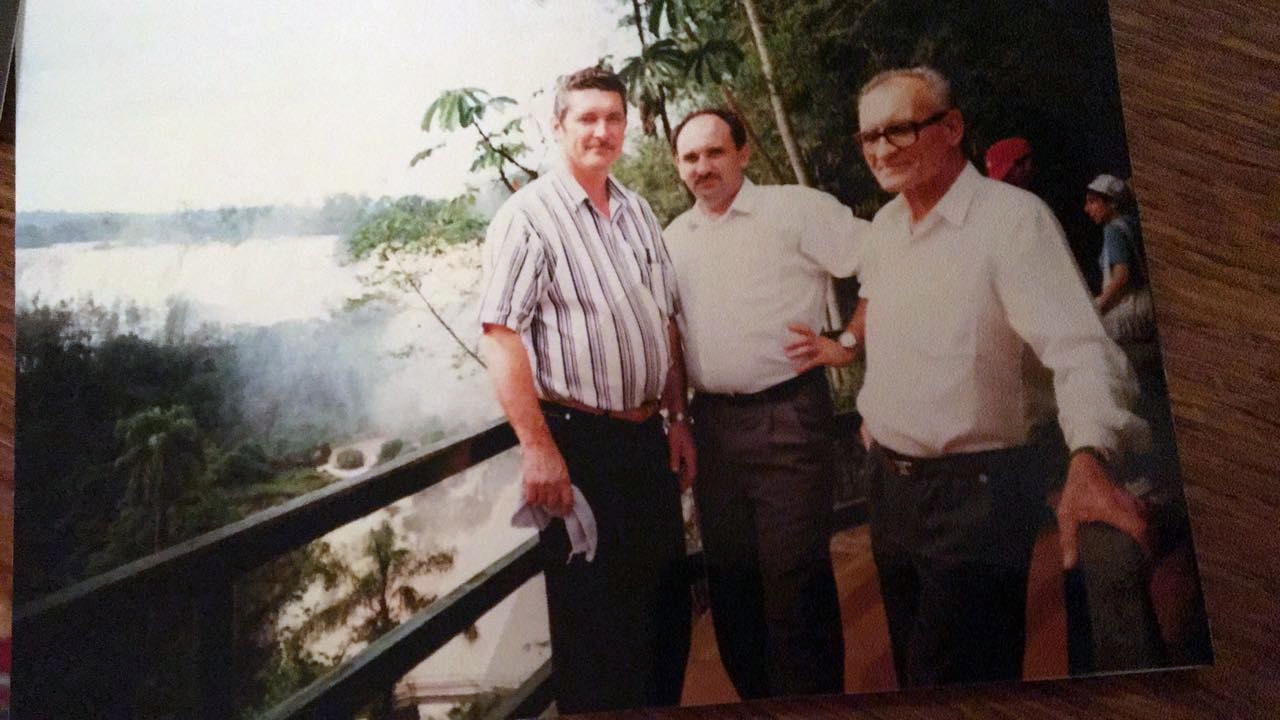 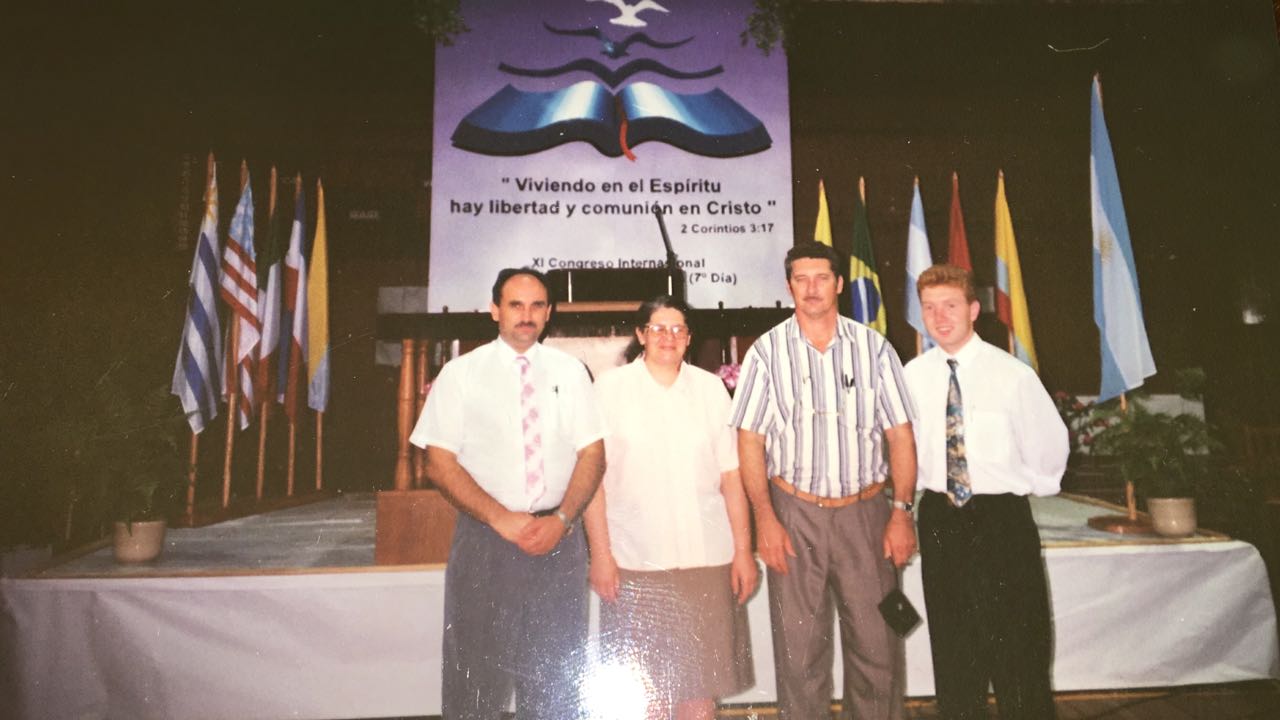 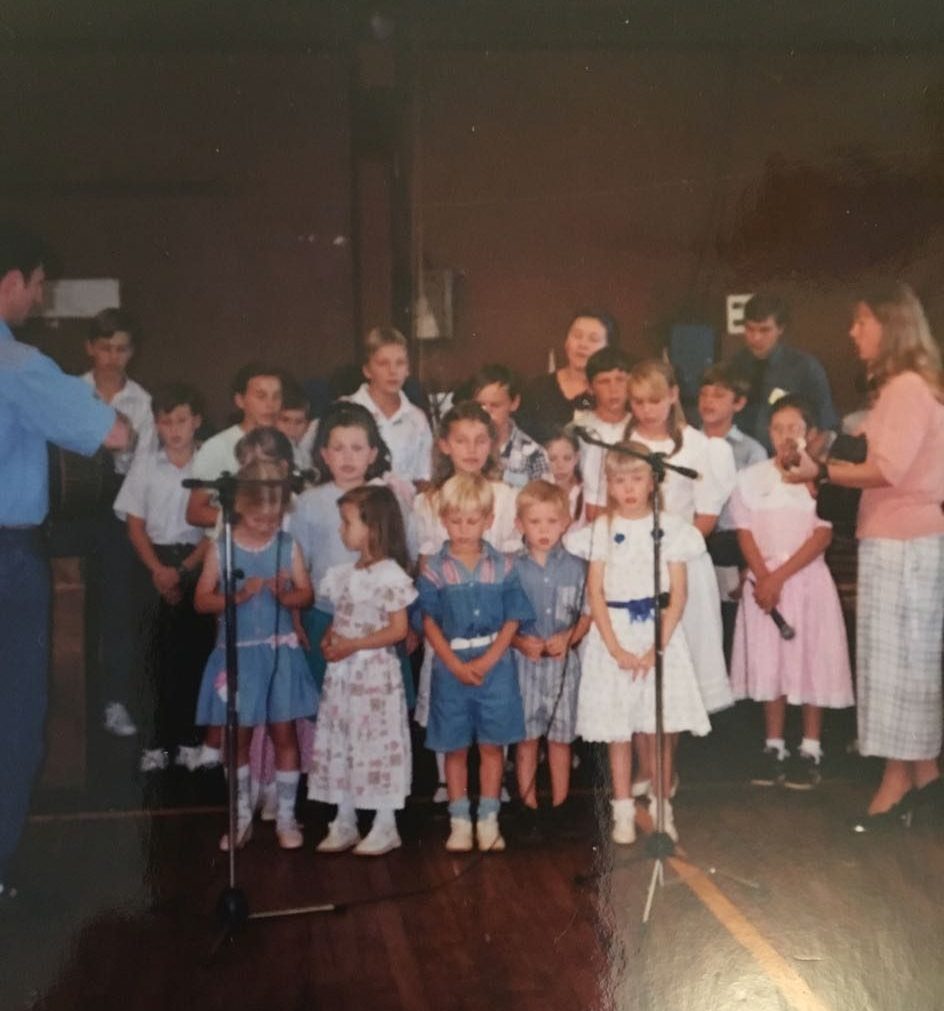 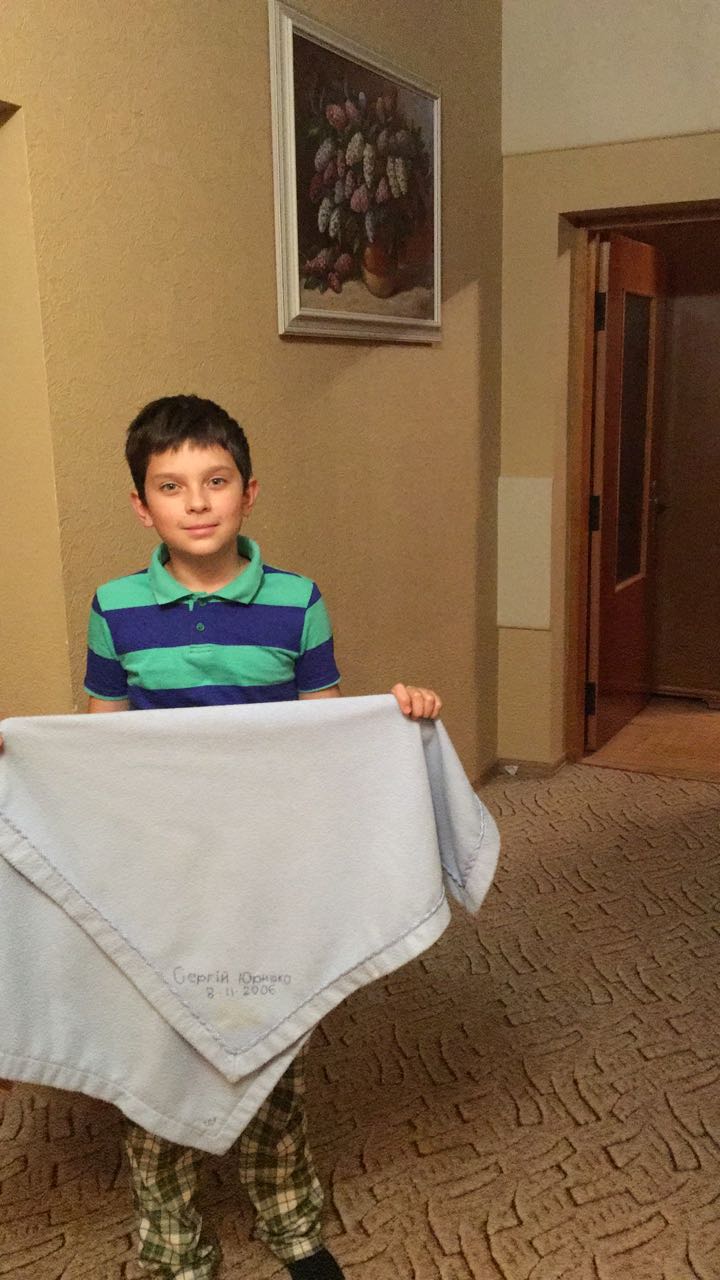 My wife, Bev, and I returned July 13 from a 25,000-mile trip to South America and Ukraine.  Our main purpose was to visit Sabbatarian groups in Uruguay.  One group consisted of Ukrainians who had immigrated to South America between World Wars I and II.

The other group we visited were Sabbath-keepers who had built their work on our literature.  We met many interesting people and learned about migrations of people and how Sabbatarianism has flourished.  In Ukraine we visited our Ambassador Foundation project, where nine students, eight from Ambassador University, are teaching English.

We left for Buenos Aires, Argentina, June 26.  We met with the pastor, Al Sousa, and his wife, Faith, and brethren in Ezeiza, an outlying church from Buenos Aires, pastored by Carlos Espinosa.  Spanish regional director Leon Walker and his wife, Reba, were with us on the first part of this trip. 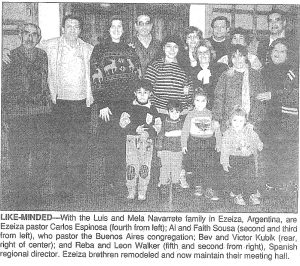 Some brethren in both Ezeiza and Bahia Blanca, including Mr. Chavez, came to us from what is today called  The Israelite Church of the New Covenant, which had similar beliefs to ours, including observing the Feast of Tabernacles.

A number of the brethren met in Mr. Chavez’ home for dinner and socializing. Here I learned the history of the Ukrainian, Russian and Romanian people and their connection with us through Dora Sepulveda (Lubenko), who spoke Ukrainian.  She moved to Bahia Blanca from Uruguay, where most of the Ukrainian Sabbatarians live.  Her brothers are members of the Salto, Uruguay, church as are several brothers of the Russian Svedov family.

Dora Sepulveda and her brothers Juan Carlos and Abel in Salto were baptized in 1971 by the late Robert Flores after hearing the World Tomorrow radio broadcast with Benjamin Rea’s voice from Montevideo, Uruguay.  The Church actually contacted some Ukrainians in this area in n1957, when Charles Dorothy visited in Uruguay. 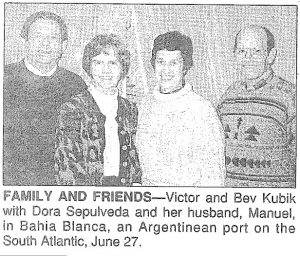 Jacobo Svedov from Salto came into the Church (there was no congregation there until 1981) as one of the early members along with the Lubencos in 1975.  Jacobo died a few years ago; his widow, a member, and her five children still attend the Salto congregation.

Thousands of these people live in the Entre Rios and Misiones provinces of northeastern Argentina and the Rio Grande do Sul region of Brazil.  Most of the Romanians, Ukrainians and Russian-descent peoples in these areas (as well as in Uruguay) are Sabbath-keepers.

From Bahia Blanca, we flew back to Buenos Aires and then across the Rio de la Plata to Colonia, Uruguay.  That evening Mike Medina, who pastors our two congregations in Uruguay and one in Bolivia, Bev and I went to a special service of a Sabbatarian Church of God.

Their church has been built on The Plain Truth in English and later in Spanish for more than 25 years. Renzo Odin, who calls himself the pastor general of this church, has volumes of bound Plain Truths and Tomorrow’s Worlds and all literature he has received over the years. 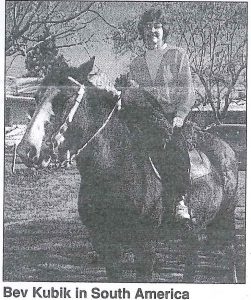 Both Mr. Medina and I spoke.  He gave the history of the Worldwide Church of God in Latin America.  Then I spoke about the relations we as a Church are building with others, in particular other Sabbath-keeping groups.

After the service, we gave them a figurine of a pair of doves and a card to express our desire to maintain peaceful relationships and build friendships. They gave us framed pictures of their church hall. Mr. Medina and I felt this was a historic moment in our working with Sabbatarians in Latin America.

After the service, we had dinner with the pastor general and his family.  Mr. Odin invited Mr. Medina to speak at one of their Sabbath services.  We in turn invited Mr. Odin to speak in one of our services.  His son Daniel wants to attend Ambassador University.

We then drove to Salto through a beautiful countryside reminiscent of the U.S. Midwest.  We made a few stops at members’ homes.  First, we visited the Ramon Jorajuria family on their farm.

Then, closer to Salto, we saw the family of Juan Carlos Lubenco, who are of Ukrainian descent.  It was fascinating to speak with people of mixed Ukrainian and Uruguayan heritage.

Sabbath afternoon I gave the sermon, which Mr. Medina translated for the brethren.  After a social, many in the Salto church walked several blocks to the Iglesia Sabatista de Dios (Sabbatarian Church of God), where we met for a combined service.     Many of the brethren are of Ukrainian descent; many of the older ones came from Ukraine in the 1930’s.  In Uruguay, the third largest ethnic group is the Russian-Ukrainian community.

Carlos Chub, their pastor of Ukrainian descent, attended our services that afternoon.  Mr. Chub opened their evening service and translated my message, which I delivered in Ukrainian.

Mr. Medina spoke about the history of the Church in Latin America and Uruguay, and said that we want to reach out in friendship to other Sabbath-keeping groups, with whom we have so much in common.  I spoke to many of them about the Sabbatarians in Ukraine.

As with the presentation in Colonia, we made a presentation of doves on a pedestal with this inscription: “To the members and associates of the Sabbath-keeping Church of God in Salto, Paysandu and Young: We offer you this card and onyx pedestal of doves as a keepsake of the visit from the ministers of the Worldwide Church of God, Mr. and Mrs. Victor Kubik of the U.S.A. and Mr. Mike Medina of R.O.U. (Uruguay).  These are an expression of peace and brotherhood representing the beginning of a friendship between two churches, both dedicated to a common goal in the gospel.”

Sunday we drove 500 kilometers (about 300 miles) back to Montevideo.  I spoke to our enthusiastic Montevideo brethren Sunday evening.

The next day we flew to New York, prepared for our visit to Ukraine and rested at pastor Steve Elliott’s home.  We left that evening.  Duane Abler from the Television Department met us in Budapest, Hungary.  He came along to film Ambassador University students teaching English.

In Uzhgorod we were met by project coordinator Joe Piotrowski and pastor Vasyl Mondich, who then drove us the two hours to Khust.  As laws about religious groups are tightening inUkraine, on this visit I had to register with the KGB so I could preach on the Sabbath.

That evening we went to the Internat High School to see hnow our students taught English.  I was thoroughly impressed with their poise and skill in the Ukrainian students’ respect for us.

I was told that by accepting students not only from the ranks of the Sabbatarians but from the community at large, we have created good relations and a unifying spirit in the Khust-Rokosovo vicinity.

Bev and I spent as much time as we could with our students.  Mr. Piotrowski and I talked about the future of the project.

Friday night we had dinner at our Ambassador students’ house and then a Bible study. We discussed the project and their impressions.

On the Sabbath, we drove to services in Rokosovo, where three other speakers and I spoke. I talked about our project and the Ukrainian Sabbatarians in Uruguay who sent their greetings.

Sunday morning we went to the garden plot for which we brought seed last fall.  Most of the seed is doing well, the string beans in particular.  The mayor of Khust, Voldymer Kaschuk, examined the plots.

Monday was our last full day in the area.  In the morning, we went to Rokosovo to see students Christine Horchak and Misa Yurkiv teaching classes.

In the afternoon, we went to the Shayan resort area, where our students put on a program for children who lived near the Chernobyl nuclear plant.

Twenty Sabbatarians were just leaving on an evangelistic mission to Siberia 5,000 miles away.  They had established a fledgling church of 25 last summer, and were returning to shore up the gains.  They had several boxes of our new Russian translation of Why Were You Born?

They expressed much appreciation for this evangelistic literature and considered this trip to be a joint venture between them and the Worldwide Church of God.  They asked me to remind brethren in the West to pray for the success of this mission.

With Nazareth Mission director Victor Pavliy and Mr. Mondich, pastor, we discussed continuing the Ambassador project.  They all want us to return.  Right now, it’s a matter of deciding how to design a more comprehensive yearlong program and assessing the financing.

They also want us to help educate their ministers in skills such as speaking. They are translating our Spokesman Club manual from German into Ukrainian and will use it for speaking classes for their ministry.

Tuesday, July 12, Mr. Piotrowski drove us back to Uzhgorod for our Air Service Hungary commuter flight to Budapest and the next day’s flight back to Los Angeles.  A most interesting two weeks! 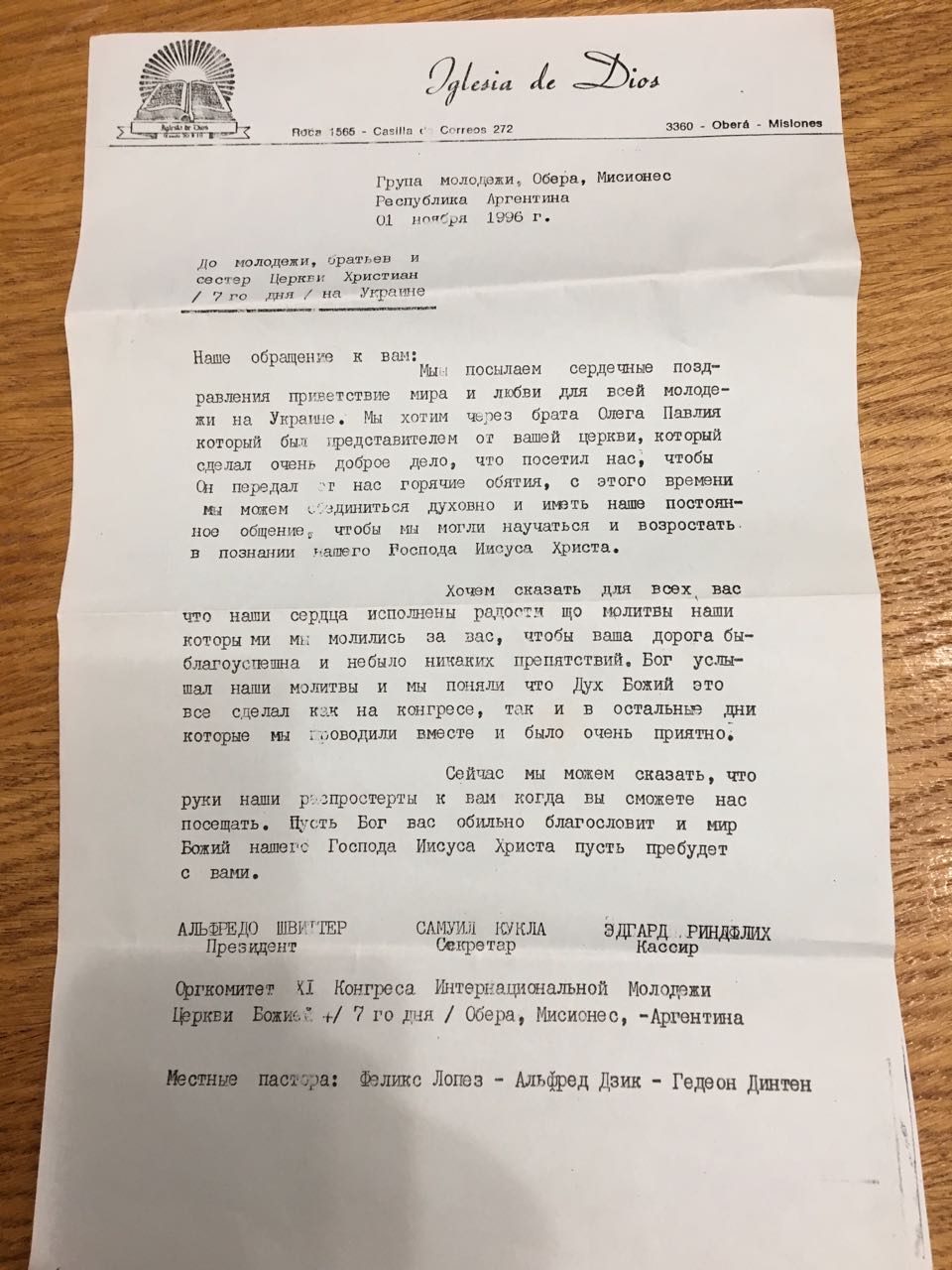 Letter from Argentina to Ukraine

Group of Youth, Obera, Misiones, Republic of Argentina
November 1, 1996
Youth, brothers and sisters
of the Church of Christians of the 7th day of Ukraine

Our greetings to you,

We warmest regards to all the youth of Ukraine with peace and love. We were glad to meet
with a representative of your church, our brother Oleg Pavliy, and he did a great service to
us by visiting in person. We send everyone a warm embrace through him. Now we can
constantly communicate and unite spiritually, in order to learn and grow in the knowledge of
our Lord Jesus Christ.

Our hearts are full of joy that the Lord heard and answered our prayers so that your road would
be without any obstacles, and you made it. And we realized that this Spirit of God made our
congress successful and all the rest of the time that we spent together. And we are very pleased
for this.

Now we can say that we are always open to communication, and we will be very happy when
you can visit us. May God abundantly bless you, and may the peace of our God Jesus Christ be
with you.
With open arms we would welcome anyone who could come and visit us.